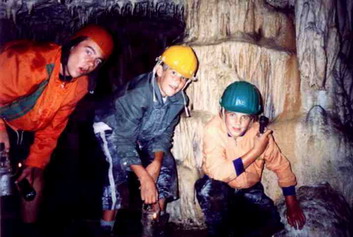 Have you ever wanted to go underground into a place untouched by civilisation? No electricity, no telephone signal? We offer you the chance to be guided into such a place, 150km from Cluj!

The Wind Cave (Pestera Vantului), is the largest cave in Romania, and with a length of almost 52km, it is also the most extensive limestone labyrinth and cave-reservation in South-East Europe.

Though only one entrance is known in the lowest (Northern) extremity, the length of the cave is growing fast from one expedition to another. The huge exploration and surveying work is not finished yet; there are several exploring and surveying teams, as well as novice cavers who are further exploring the complicated passage-networks.

The actual length of the cave is around 52km, but there are many passages, which have never been surveyed. The Wind Cave is a multi-levelled complex system, which has a main active passage and three main fossil floors. In actual fact, the number of the fossil levels is higher; in some sectors there are 6, 7 or 9 levels together, forming very complicated passage networks.

The average temperature in the cave is 11.8C, varying in the entrance area and the main passages of the closed sector. The very powerful draft, that can be sensed in the entrance and in the far corners of the cave as well, is bi-directional being controlled seasonally.

The program:
We'll travel to Suncuius - the nearby village, to the riverside of the Cris river; here we'll take the equipment and for a few hours we'll descend in the beautiful underground world of the Wind Cave, and visit the tourist part of it. Other optional activities: swimming or kayaking on the river, visiting the ancient (Neolithic) settlement from the Big Hungarian Cave, or the Vadul Crisului Gorges and cave.

We are ready to show you the beauties of the underground world!

THE PACKAGE DOES NOT INCLUDE:
- train tickets to Suncuius village and back;
- All meals and drinks;
- personal expenses.