Sibiu - The Cultural Capital of Europe 2007 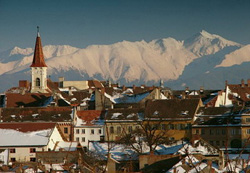 Few Romanian cities are as pleasant as Sibiu. It possesses a history of more than 800 years. Sibiu has been designated the title of European Cultural Capital 2007, an honour who was shares with Luxemburg.

Our tour will focus on presenting the historical and cultural Sibiu, but also the city of today. Along the centuries, the town opened its gates to the world and became home for people of many cultures, speaking different languages and practicing different forms of religion.

Sibiu (Hermannstadt for the German minority) with its different ethnic communities developed a unique, multicultural life. That's why the theme chosen for the cultural program of the city for 2007 is "city of culture, city of cultures"

Sibiu has one of the best-preserved, medieval city centres in Europe built by the German settlers in Gothic sturdiness. The city has two easily walkable levels: the 'upper town', which contains most of Sibiu's historical sights, and the 'lower tower', which is a charming wasteland of old houses and cobbled squares. Connecting the upper and lower towns are dozens of tunnels, stairways and hidden passageways which will leave you speechless.

The Large Square is the historical centre of Sibiu, first documented in 1411 as corn market. Public executions and meetings used to be held here. It marks the heart of the city. It's home to shops, cafes and some top tourist attractions. The Small Square is the second largest historical place of Sibiu and one of the most beautiful squares in town. Dominated by the Evangelical Church, The Huet Square is surrounded by medieval gothic buildings. It is the oldest of the three main squares of the city.

Sibiu has the largest concentration of tourist attractions in Romania. Sibiu alone has over 100 attractions of national importance and together with the surrounding area the points of interest exceed 140.

Here, you can find The Brukental Museum, the oldest in Romania and the second museum ever founded in Europe, which was opened to the public in 1817. Brukenthal Museum is a complex of six museums which have different locations and their own distinct cultural programs.

Sibiu is beautiful; indeed a delight for the eyes!

The Museum of painted icons on glass from Sibiel is the largest of this type in Europe. Situated in the courtyard of the 18th Century Orthodox Church the museum has a collection of extraordinary icons, some of them 300 years old. It started in 1968, due to the efforts of Zosim Oancea, the priest of the village who encouraged the peasants to create and donate icons for the museums.

Join us for a wonderful day of exploring the European Cultural Capital in 2007!.

TOUR INFORMATION:
- duration - one day tour; flexible according to the cultural events in Sibiu;
- validity - thoughout the year;
- minimum people required - 2.
- transport - the tour leaves from Cluj; on request, transfer or returning through Brasov or Sighisoara can be arranged;

THE PACKAGE DOES NOT INCLUDE:
- entrance tickets throughout the day;
- the transfer to Sighisoara or Brasov, which can be arranged on request;
- All meals and drinks;
- personal expenses.