Discover the beauty and mystery of Rosia Montana, an ancient village in the middle of the Apuseni Mountains!

We wil start our day from Cluj, but before going hiking we'll visit the salt mine of Turda and Lupsa monastery, the first orthodox monastery along the Ariesului valley, built in the 14th Century. 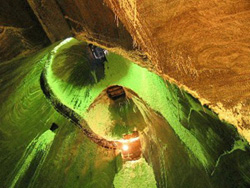 Turda Salt Mine was known in the middle ages as as one of the most important salt deposits in the entire region of Transylvania. The Salt Mine is mentioned in official documents in the middle of the 13th century, when the mine was offered to the Transylvanian Catholic Church leaders. In the Middle Ages, Turda was one of the largest places of salt extraction in Transylvania. It ceased activity in 1932, to be used as an anti-air craft shelter during the Second World War. Starting from 1992 the mine entered into the tourist circuit. With its impressive galleries, mining system, great accoustics and very healthy microclimate, Turda Salt Mine is most definately a place to visit.

The orthodox monastery of Lupsa has been built in 1429, close to the river valey of Aries. It played an important role during the middle ages in preserving the Romanian orthodox faith. The monastery had been closed in 1820, due to Austro-Hungarian pressures and re-opened in 1992 after the Communist regime collapsed. Our visit will be a short one, enough though to see the old church and the modern painted representation of the Final Judgement.

Rosia Montanã is the oldest documented mining settlement in Romania (approximately 1870 years old). The gold from Rosia Montana is present even in the famous Egyptian pyramids. The same gold has attracted many greedy people and now Rosia Montana is in danger of disappearing because of a proposed open cast mining project. The people of Rosia Montana, Greenpeace and other environmental NGO's continue in their attempts to save Rosia Montana.

Have a nice walk in the old centre of Rosia Montana and in the surrounding hills; admire the beautiful scenery of the Apuseni Mountains; visit the Roman galleries and the mining museum and listen to peoples stories about the Romanian El Dorado. All of this accompanied by a local guide who can introduce you to the mystery and beauty of Rosia Montana. By visiting Rosia Montana, tourists can be made aware of the plight of the local people in their attempts to preserve their community and environment. 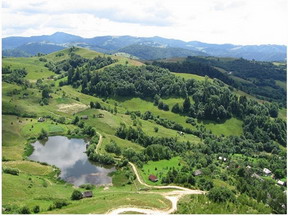 The importance of Alburnus Maior (the Roman name of Rosia Montanã) was significant in the Dacian-Roman times, with pieces still preserved today: The Cârnic mountain in Rosia Montana has been named by several archaeologists. "Olimp Mountain" contains important archaeological evidence, with its hundreds of kilometres of Roman, Dacian, and medieval galleries. There is still lots to be discovered. All of these represent exceptional proof of mining history.

In 1997, a Canadian mining company announced their intention to exploit the local gold using cyanide technology in open cast pits. The company is currently in negotiations with the Romanian Government in order to gain the necessary permission to exploit the resources. However, the general opinion of the population tends to be against the plan.

THE PACKAGE INCLUDES:
- transfer and tour Cluj - Turda Salt Mine - Ariesului valley - Rosia Montana - Cluj, by car or minibus;
- English, German, Italian or Hungarian speaking guides;
- snack and refreshments, in the car and while hiking the mountain;

THE PACKAGE DOES NOT INCLUDE:
- entrance tickets to the Salt Mine;
- All drinks and meals;
- personal expenses.