Two days into the land of old traditions - Maramures region

Take this opportunity to join us on a visit to one of the few regions of the country where traditions have been preserved. Our trip highlights will be: the famed wooden churches in Maramures, Sapinta Merry Cemetery, the former communist prison in Sighet and of course, the local plum brandy (tuica)!! 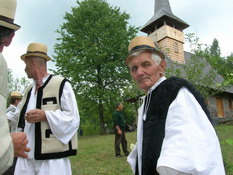 Thanks to its richness in minerals, its large pastures and hay fields, forests and agriculture, its fauna and flora, Maramures has been inhabited for many centuries. Due to its remote position, the county of Maramures is also rich in ethnographic and folk elements. Folk art is preserved here in a very original form: houses, wooden gates, tools, textures, pottery, unique churches made entirely from wood, and specific customs. Because of their age and architecture, 8 of the wooden churches in Maramures are placed on the UNESCO world heritage list.

Following the Mara valley, our first destination is the tiny Orthodox church in Desesti, built in 1770 in the old cemetery and dedicated to the Holy Paraskeva. Due to its traditional local architecture and its painted depictions from the Bible, the church was listed on the UNESCO world cultural and natural heritage. One of the most beautiful villages in Maramures is Budesti; the old village church, built in 1643, holds a small collection of icons painted on glass and wood; their prize piece being an 18th century painting of the Last Judgment and also the coat of mail of Pintea Viteazul, a famous outlaw who used to take from the rich (Hungarian and Austrian nobility) and give to the poor (Romanian peasants) and had his hiding places in the forests on Mount Gutin. 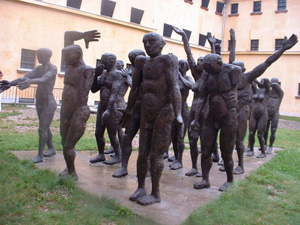 Our next destination will be Sighetu Marmatei, the major town of historical Maramures first documented in 1326, and situated where the rivers of Tisa and Iza meet. Sighet (as it is locally known) is home to different touristy sights, but definitely the most important one is the town's former maximum-security communist prison, open today as a museum, named: "The Memorial of the victims of communism and of the resistance". After the Soviet conquest of Romania, one of their main objectives was to destroy the internal political structure. In order to do that, they organized fake trials upon which the Romanian democratic leaders were imprisoned. Between 1948 and 1952 approximately 180 members of Romania's academic and political elite were imprisoned in Sighet. The museum, established in 1993, was nominated by the Council of Europe in October 1998 as the third most significant European memorial dedicated to victims of attrocities, along with the Auschwitz Memorial and the Normandy Peace Memorial. After visiting the prison we will pass by the only remaining synagogue and Elie Wiesel's house. The Jewish writer and Nobel peace prizewinner (1986), Elie Wiesel was the one who coined the term "Holocaust"; he was born in Sighet and was later deported to the death camps. 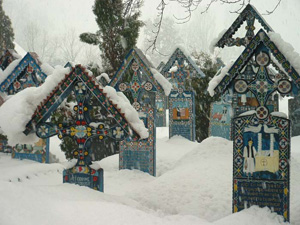 The last tourist spot for the day will be Sapinta village, 12 km north-west of Sighet, and just 4 km south of the Ukrainian border. The local wooden sculpting technique and the strong Orthodox beliefs are illustrated in the church cemetery, better known as SAPINTA'S MERRY CEMETERY. It was the creation of Ioan Stan Patras, a simple wood sculptor, who in 1935 started carving crosses to mark graves and to paint them in blue, the traditional color of hope and freedom. Even more interesting, he inscribed a witty epitaph to the deceased on top of each cross, telling a different story about the persons life or death. Sapinta's cemetery attracts thousands of tourists yearly and is definitely one of the highlights of Maramures. The colored crosses and humourous epitaphs reveal the way those people lived and died. Since Patras' death, Dumitru Pop, his apprentice, has continued the tradition. Recently completed, and close to the Cemetry is the tallest wooden church in the world. At 74 metres high, constructed mostly from wood, the church in Sapinta will soon become a tourist hotspot.

After a long day, we'll go for a traditional Romanian dinner and stay overnight in a local guest house in the remote village of Poienile Izei or Barsana.

The next day, soon after the breakfast we will visit the local wood church and monastery, a very popular pilgrimage spot in Maramures. It was the last Orthodox monastery built in the region before Serafim Petrovai (head of the Orthodox church in Maramures) converted to Greco-Catholicism in 1711. Due to its extraordinary position and architecture, the church is listed on the UNESCO world heritage protected areas.

Heading through the Iza valley we'll pass several villages like Stramtura, Rozavlea, heading again to Poienile Izei, home to the most dramatic frescos of hell in the entire area. The church here was built in 1604 and its interior frescos date back to 1783. They depict hell, symbolized by a ferocious bird waiting to swallow up the sinners.
The oldest wooden church in Maramures, dating from 1364 is in Ieud, and is also named as "The Church on the hill". Made out of fir wood, built on the castle ruins, the church hosts extraordinary interior frescos, that have recently been renovated. Ieud's second church, Greek-Catholic was built in 1717. The church is unique in this region as it has no porch. Located at the southern end of the village, it houses one of the largest collections of glass icons found in Maramures.

Nearby, there is an old traditional house, recently transformed into a museum, where you might buy handy crafts and different other folk stuff.

At the Southern tip of the valley is Dragomiresti village, first documented in 1405. A traditional art museum dedicated to the countrywomen of Maramures has been unveiled. Apart from seeing and buying hand crafts, you'll have the opportunity to get dressed for photos in unique Maramures costumes.

Before saying goodbye to Maramures, we'll have lunch in a local farm house and soon after, we will head south to Sacel along Salauta river valley.

We highly recommend that this program be open to changes, considering that Maramures has many local traditions, specific events and festivals, country fairs, and religious celebrations.

Tour information:
- duration - 2 days;
- validity - thoughout the year;
- minimum people required - 2;
- transport - over 600 km by road.
Note: This schedule is flexible according to the departure time, weather and road conditons, and your own suggestions! The first and last days of the tour are also open to change according to your wishes and travelling program.

For accommodation (a regular guest house in a country side), all the meals and entrance tickets, you can consider 40 - 50 euros/person.