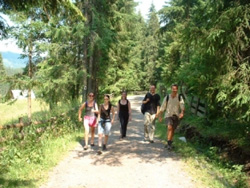 Located in a remote place, deep inside the forests of the Apuseni Mountains, Scarisoara is the biggest ice cave in Romania, a unique phenomenon in Southeastern Europe. The exact date when the cave was discovered is unknown, but is mentioned in 1863 by the German geographer Adolf Schmidl, who made some observations and the first map. According to the scientists, Scarisoara Ice Cave was formed during the Ice age, when these mountains were covered by snow and ice.
We will start our day from Cluj, but before going hiking we'll visit the Salt Mine of Turda and Lupsa Monastery, the first orthodox monastery along Ariesului valey, built in the 14th Century.

Turda Salt Mine was known in the middle ages as as one of the most important salt deposits in the entire region of Transylvania. The Salt Mine is mentioned in official documents in the middle of the 13th Century, when the mine was offered to the Transylvanian Catholic Church leaders. In the Middle Ages, Turda was one of the largest places of salt extraction in Transylvania. It ceased activity in 1932, to be used as an anti-air craft shelter during the Second World War. Starting from 1992 the mine entered the tourist circuit. With its impressive galleries, mining system, great accoustics and very healthy microclimate, Turda Salt Mine is most definately a place to visit.

The orthodox monastery of Lupsa was built in 1429, close to the river valley of Aries. It played an important role during the middle ages in preserving the Romanian orthodox faith. The monastery closed in 1820, due to Austro-Hungarian pressures and re-opened in 1992 after the Communist regime collapsed. Our visit will be a short one, enough though to see the old church and the modern painted representation of the Final Judgement. 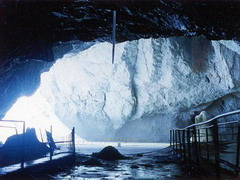 Soon after we will leave the car in the village of Garda de Sus and start hiking to the ice cave. There will be around 2 hours of hiking and then after easy walking through forests and villages until we reach the cave.

The glacier entrance (1165m high) is made through an impressive sinkhole, with a diameter of 60m; descending 48 meters, on the bottom of a great abyss, we'll walk over a surface of 70,000 cubic meters of ice, 23 meters thick. Obviously, the glacier temperature is constantly below 0, so in the summer time while descending, there might be a temperature difference of 25 degrees or even more.

The most impressive ice structures are found in the second chamber of the cave - named "The Church", where the ice formations reach over three meters high, with diameters of 15-30 cm.

After climbing back into the daylight, we'll go for a lunch at a local Romanian guesthouse, a few minutes away from the ice cave. The plum brandy ("tzuica") or wild berry brandy ("afinata") will surely be on the table.

Then after, we'll descend a different way through forests and hayfields to Orancusa gorge which will lead us back to the car ...

Get ready for an extended day trip into the Apuseni Mountains!

THE PACKAGE INCLUDES:
- transfer and tour Cluj - Turda Salt Mine - Ariesului valley - Garda de Sus - Cluj, by car or minibus;
- English, German, Italian or Hungarian speaking guides;
- snack and refreshments, in the car and while hiking the mountain;

THE PACKAGE DOES NOT INCLUDE:
- entrance tickets to the Salt Mine and to the Ice Cave;
- lunch at Scarisoara village;
- personal expenses.

Note:
- we reserve the right to change the program according to the amount of daylight or the weather conditions;
- our tours are open to everyone interested, every day of the week. The rates are valid for our guests only!