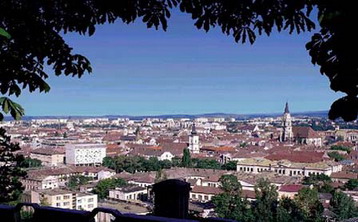 Cluj-Napoca is located in the western part of the Transylvanian plateau, where the mountains end and the Gilaului Mountains begin.

The area has been of strategic importance, due to the fact that people would gather to trade goods at country fairs, which in turn developed into the medieval cities of Transylvania. These cities include Sibiu, Brasov, Sighisoara, Aiud, Medias, etc. One of this medieval cities, Cluj, gained the prestige and the nickname"Treasure City of Transylvania".

The name; an explanation and some historical observations

The name Cluj comes from Latin, from the word 'CLUSIUM', meaning 'a narrow place, surrounded by hills'. A local, Dacian settlement is mentioned by the roman historian Ptolemeus, with the name of NAPUCA, in the 3rd Century BC. The archeological site is identified today in the northern area of Cluj, in the suburb of Someseni.
However, the oldest roots of Cluj date back to Pre-historical times, with the human presence being archeologically documented in this area, approximately 80,000 - 120,000 years ago, in the Paleolithic age.

During the Roman Age, the settlement had a different status in the hierarchy of the Roman settlements, from vicus (a rural area) to municipium, (urban settlement) in the times of Hadrianus (118-119 AD) the capital of the region, under Marcus Aurelius (164-180 AD). The name 'Napuca' also changed to the present day name of 'Napoca'.
In the early Middle Ages, documents inform us about a CASTRUM CLUS, and from the 11th Century, about KOLOSVAR, a Hungarian royal fortress. Transylvania from this time was part of the Hungarian Crown for around six centuries.

The German colonialists were brought here by the Hungarian king Istvan IV, between 1270 - 1272. From this point, the settlement also gained a german name: KLAUSENBURG. A new status was given, by the Emperor Carol Robert of Anjou in 1316. Becoming a CIVITAS, its inhabitants were also provided with the legal right of fortifying their settlement: new walls of the fortress, towers and military structures for observation were built.

Under the Hungarian kings, Cluj was provided with many privileges and was often financially supported by the Crown in order to develop. The explanation comes from the fact that Cluj is the native city of 2 great Hungarian kings: Mathias Corvinus (born in 1443) and Istvan Bacsai (born in 1557).

The 16th Century was the most prosperous for the area; Cluj being the most important city of Transylvania, and being an autonomous principality under the Turks suzerainty, after 1541.

Religious wars at this time were all to common in Europe due to Luther's complaints against Catholic institutions and priests. The reformed cults gained more and more former Catholic territories, Cluj then became the Transylvanian centre of Protestant cults. In this context, the Council of Transylvania (Dieta), held in Turda, proclaimed for the first time in the world, the freedom of religions though managed to avoid a civil war in the principality. The Catholic restoration came together with the establishing of Austrian domination in Transylvania, after 1686.

Between 1790 -1848, Cluj was the official capital of Transylvania, and was the central seat of Government (Guberniul) . All the important institutions were sheltered by new buildings constructed for its new and important status. At the end of the 17th Century, the population was about 30.000 and the city had been enriched with glamorous civilian residences: palaces and head offices for the different institutions, and beautiful churches for the different cults, built in baroque and neoclassical styles.

By the end of the 19th Century, Transylvanian and Western archituture had syncronised in their styles; Transylvania having caught up with the rest of Europe. Beautiful buildings in the style of Art Nouvaeu and Secession were constructed and still stand today. In 1918, when Transylvania was united with Romania, Cluj continued to play a very important role in the political and cultural life of Transylvania. In 1940, Cluj was the scene of strong public protests against the Treaty of Vienna, which decided that Transylvania would be returned to Fascist Hungary.

In December 1989, during the anti-communist revolution, 27 people lost their lives in the centre of Cluj, for their courage in rising up against the dictatorial regime of Ceausescu.

There are 120,000 students in Cluj, studying at the prestigious Babes-Bolyai University, and also in some newer, private institutions. There are many cultural institutions in addition, such as: The Central Library Lucian Blaga, The Fine Arts Institute, The Conservatory, 3 theatres, the Romanian Opera, a Philharmonic Orchestra and countless museums, The British, French and German Institutes are situated in the city, along with the biggest Botanical Garden in Eastern Europe.

All our tours provide an understanding of the social, ethnic, political, religious, and culture (both past and present) as they are reflected in the local mentality.
Our proposals follow a specialized route:
a) HISTORICAL-ARCHITECTURAL TOUR
Includes a historical discussion focused on Cluj and Transylvania, figured on the presentation of the main sites, from archeology to contemporary settings, in a chronological order.
Duration: 2-3 hours.
Price:

b) ARCHITECTURAL-STYLISTICAL TOUR
A presentation stressing the most valuable monuments; headlights the construction styles and techniques which were preferred by the upper class in different historical times in Transylvania.
Duration: 2-3 hours.
Price:

c) RELIGIOUS PERSPECTIVE TOUR
Focused on Cluj as a historical centre, where all the important Christian cults were represented and they managed to live together along the centuries.
The churches of Cluj are characterised by beautiful Transylvanian features. Learning about Gothic, baroque, and neoclassical styles will help us understand the Transylvanian conditions of life and the religious climate from the 12th to the 19th Century.
Duration: 2-3 hours.
Price:

d) BASIC CLUJ
This tour combines information and visits from every field; from history to ethnography, from architecture and fine arts to handy crafts shopping, pointing out the main sites to visit in Cluj.S
Duration: 2-3 hours.
Price:

e) MUSEUMS TOUR
We provide professional art guides for those interested in the indoor culture, such as: the Fine Arts Museum, the History Museum of Transylvania, the enchanting Museum of the Pharmacy (first drug store, established in 1537) and outdoor settings, such as the Ethnographic Park or the biggest Botanical garden in Eastern Europe.
Duration: 4 hours.
Price: